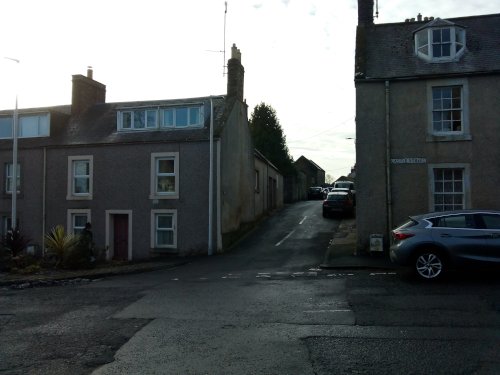 At this junction there is also a road on your right called Clouds.

Two fanciful origins for this name may come from McLeod, the name of a former resident in the area, or possibly from its high position. Another possibility is that it was named after a kind of reinforced hat made at Clouds House.

However, it was once called Spinning Yard Head and it was here that a material known as 'clud' was made. This material was mentioned by Robert Burns in one of his letters, where he notes that he bought a length of 'Dunse Clud' and he hopes that 'twill wear well'.

Most of the buildings on this street date from the early 19th century.

It is difficult to see the houses as most are south facing, away from the road.

After walking along Clouds for approximately 100 yards to give you a feel for it, return to the main road. At the junction look to your right across the road, where you will see two fine gate pillars through which the Parish Church Manse used to be. The original one has been demolished and a new Manse built on the site. The barn for the Manse still stands, now converted into a house.

Many years ago, the ministers of a parish did not receive a cash salary but benefited from a share of the agricultural produce from the parish. This grain was stacked for the minister in a Tithe or Teind Barn, hence the name Teindhillgreen. Historically a teind referred to one tenth of the value of the crop.