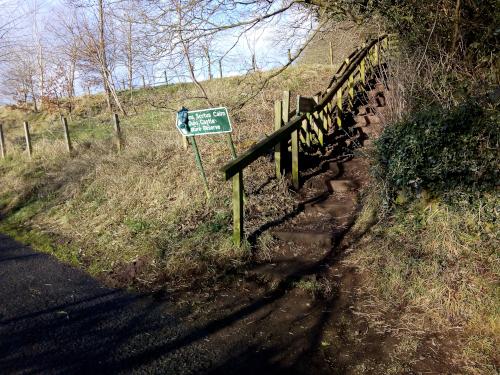 Beyond the North Lodge Archway on your right-hand side is a set of steps leading to the Old Town Cairn and Duns Law, with magnificent views of Duns and the Merse. (The paths up here can be rough, so may be unsuitable for anyone with walking difficulties.)

Duns Law, the original site of the town, has the remains of an Iron Age hill fort at its summit. Similar structures, such as Edin’s Hall Broch (several miles to the north), suggest the area was both a domestic and defensive site at a very early stage.

The early settlement was sited on the slopes of Duns Law close to the original Duns Castle, which was built in 1320 by the Earl of Moray, nephew of Robert the Bruce.

By 1588 the town, which had been burnt several times, had relocated to its present site at the foot of the Law. The burgh’s original location has been known since as the Bruntons (a corruption of burnt town).

Charles 1 from shortly after his accession to the throne of Great Britain in 1625 determined to impose Episcopalianism on his Scottish subjects. Charles perhaps saw himself as heir and successor to Henry V111 of England who with an arrogance almost defying belief had declared himself Head of the Church. In Scotland however matters had taken a very different route.

Matters came to a head in 1638 when the English liturgy was preached in the High Kirk of Edinburgh, resulting in rioting, civil disturbance and the signing of the National Covenant. A copy of the Covenant was signed in Duns Castle and is still preserved there.

The Covenant signed by thousands, many with their blood, pledged to uphold the reformed religion "against all sorts of persons whatsoever" and called for free parliaments and assemblies.

Charles would have been well advised to back down. Rather however he chose to lead an army north against his own subjects marching from York and taking up a position on the south bank of the Tweed at Berwick.

The army converged on the Law in two Divisions, one from Dunglass and one from Kelso, where they had been watching the approaches from England of the Royalist Army under Charles 1 who was determined to compel the Scottish subjects to adopt Episcopacy.

The Standard of the Covenant was hoisted on the stone known as the Covenanters Stone, which is still on the summit of the Law and encased in a metal grille (made by local Blacksmith James Carss in the 1950s).

The result however was not battle but stand-off. Envoys were sent between the two Camps and a 'Pacification' was arranged in terms of which the Covenanting Army was disbanded and the Royalist army withdrew from the Borders.

Charles however, never a man of his word, ignored the terms of the Pacification and again showed signs of launching invasion against his Scottish subjects.

The consequence was that Leslie reformed his army and again took possession of Duns Law with 20,000 men He quartered his horsemen 2,500 at Choiclee under Lord Cassilis.

Leslie than, leaving a Garrison at Duns marched by way of Swinton and Coldstream and took possession of Newcastle effectively thereby setting in train events which were to lead to the English (although truly the British) Civil War.

It has been said that Scotland retained her religious freedom not by Canon Law, not by Civil Law but by Duns Law. 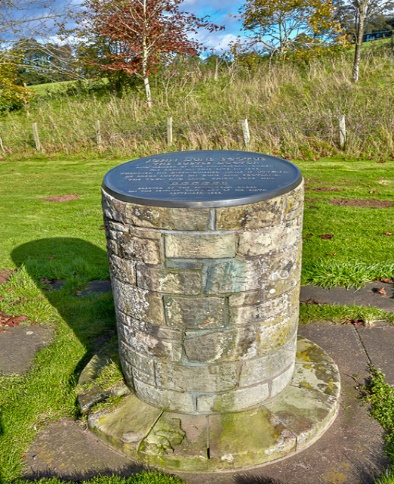 This cairn was erected to the memory of John Duns Scotus (see the section on the Public Park, where there is a statue of him). Built in 1966 by the Franciscan Order of the Roman Catholic Church, this cairn commemorates the 700th anniversary of the birth of John Duns Scotus, himself a Franciscan. The cairn is built on what is said to be the site of the cottage where he was born.