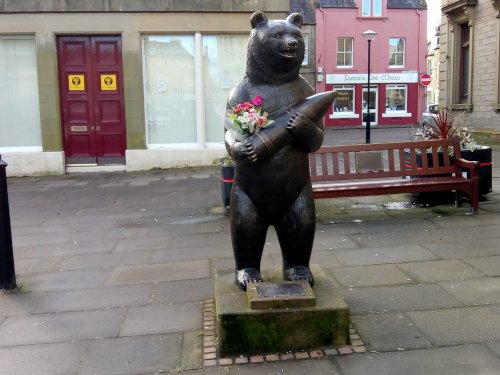 Wojtek the Soldier Bear was a mascot of the Polish forces, some of whom were stationed around Duns during the Second World War. He joined them as a young cub during the campaign in Persia and travelled with them to Mesopotamia, Syria, Palestine, Egypt, Italy and beyond. He was enlisted as a private to ensure he received rations, and later promoted to corporal! He helped move ammunition crates at the Battle of Monte Cassino. It was said Wojtek could 'smoke and drink like any man'. After the war his unit was stationed at Winfield Aerodrome in Berwickshire and after demobilisation he lived at Edinburgh Zoo.

There are statues of Wojtek in Krakow and Żagań in Poland, Edinburgh and London, as well as this one here in Duns, which was unveiled in 2016.

The statue was kindly donated by Żagań, the twin town of Duns, recalling our links with the Polish forces.

As you look at Wojtek the building behind him there is the NFU Mutual office.