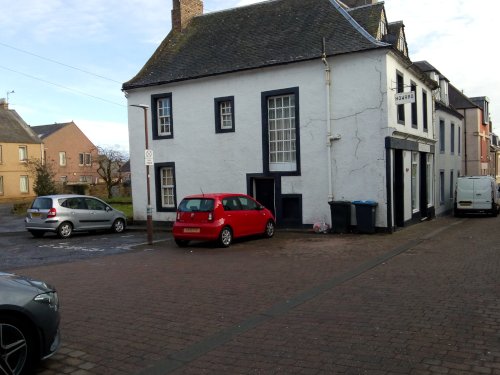 Castle Street is in three sections: the semi-pedestrianised South Castle Street from the Market Square to Newtown Street, the middle section from Newtown Street to Teindhillgreen, and the north section which goes straight up the hill to the North Lodge of Duns Castle.

Walk up Castle Street and on your right is an electrical shop, 18 Castle Street. This building once housed the rooms of the Burgh Court and several legal offices. The courtroom, in which the Baron Baillie* would have sat when dispensing justice, was to the rear of the ground floor. The shop front is a later addition. At the side, the pattern of the windows is unusual: the large window lights the stair inside. Notice how the top of the doorway is merged with the sill of the largest window. See also the bellcast at the eaves of the slate roof.

*A Baron Baillie was the deputy appointed by a Baron to exercise the jurisdiction of the Baron, both civil and criminal, in the Barony Courts. He might also act as an assessor in such Courts. The Barony of Duns still exists and is held by the Hay family of Duns Castle.