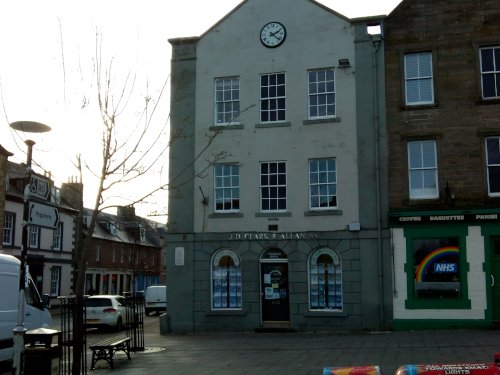 On the west side of the Market Square is a three-storey block with a clock on the gable. This is the Tolbooth House, where market traders paid levies to sell their goods and where those who fell foul of the law were imprisoned.

The building you see here dates from the early 19th century and occupies the site of an earlier town house of a local family — the Cockburns of Langton, who held the lands of Duns prior to 1698. The Rotary Club of Duns presented the clock in 1976.

A plaque to commemorate the 500th anniversary of Duns being granted its Burgh of Barony status, by James IV in 1490, can also be seen.

The stone on the corner is a rubbing stone to stop horse drawn carriages from colliding with the building.

Cross to the north east corner of the Square, near to The Jim Clark Bistro