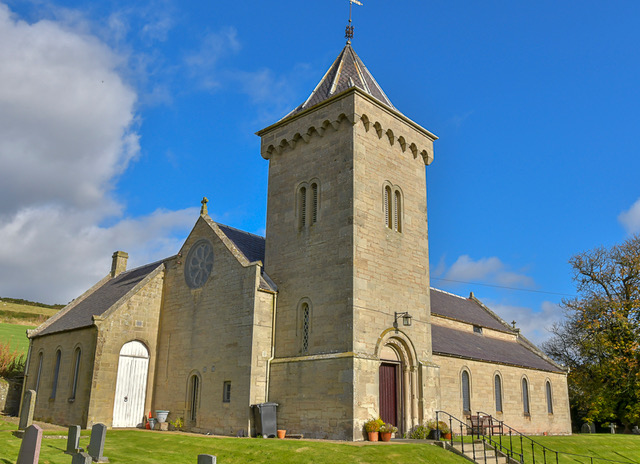 William Hay of Duns Castle had this Scottish Episcopal church, erected in 1854 to a design in the Romanesque style, which he had seen in France or on the banks of the Rhine, while on a sketching holiday. No doubt he brought his sketches back to Duns. As well as being an amateur artist and architect, Mr Hay was the patron of the famous professional architect James Gillespie Graham. The slated roof has bands of fish-scale slates, the windows and door have simple round-headed arches. The interior continues the Romanesque theme and has some fine decoration, although glazing has now enclosed the choir loft.

Further along, beyond Christ Church at the junction with Tannage Brae, is the area once known as the Pleasance, where the house Wellfield is situated. This was once a boys’ school.

Tannage Brae, which connects with Easter Street was, of course where there were tanning pits used to tan skins, which would be taken and used in the area of South Street known as the Skinnery.

Return along Teindhillgreen, down and left and joining Currie Street

Returning back along Teindhillgreen you come to a street on the opposite side of the road, called Glebe Park, named in memory of the Glebe, the area of farmland owned by the Parish Church.

Its main face is of stugged ashlar* with octagonal buttresses and pinnacles, pierced by tall timber-traceried windows, and capped by a square corbelled bellcote.

*Stugged ashlar is a cut stone, marked using a thin nosed chisel all pointing in the one direction

Cross the road and walk up the Lane opposite towards Church Square. 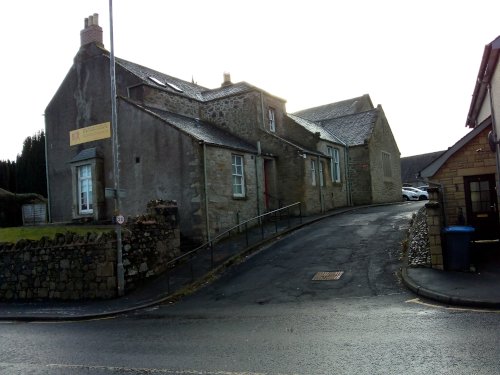 On the left of the lane there is a small gate, on the rise up from Currie Street, giving access to the Parish Church graveyard. There are many fine gravestones, some having the word 'Dunse' inscribed on them, this being the spelling used for the town from the 1720s until 1882.

From the graveyard you will get the best view of the Parish Church.

Return to the lane and turn left up to the rear entrance to the Church, by the bell.