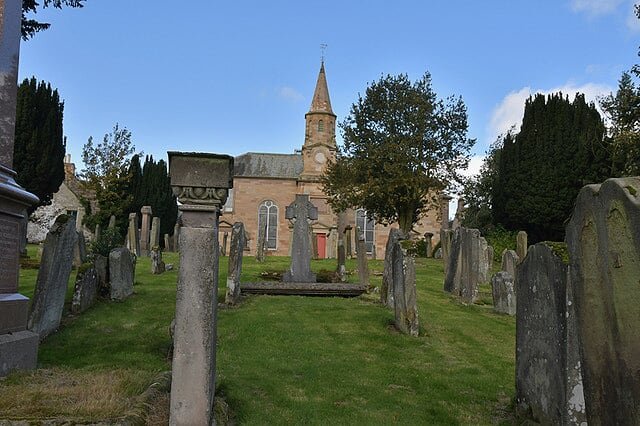 Enter the church from the rear by the bell and access the gallery, from where a good view of the interior can be seen.

The ancient parish church was taken down in 1790, although some vestiges of the original building remained until they too were demolished in 1874. The church of 1790 was destroyed in a fire in 1879 and restored in 1881, forming the present building. Some elements of the 1790 church remain, for example the tower, upon which is an inscribed tablet detailing its history. The interior has a fine black and terracotta tiled floor and there is a panelled gallery with boxed pews for the families of the local estates.

One such family was the Ainslies, who lived at Berrywell on the eastern edge of town. In 1787 Robert Burns visited Duns with his friend Bob Ainlslie, and stayed with the family. Burns attended the church and seeing young Rachel Ainslie searching the bible for the passage to which the minister was referring, Burns wrote a note to her thus:

Fair maid, you need not take the hint,
Nor idle texts pursue;
'Twas guilty sinners that he meant,
Not angels such as you.'

Rachel Ainslie is buried in the Ainslie family grave, which can be found in the parish graveyard.

The south wall is dominated by an ornate organ — the first ever approved for use in the Church of Scotland — with stencilled pipes, and there are also a number of colourful stained-glass windows.

The bell that sits outside the rear entrance to the church came from the old Town Hall, which stood in the Market Square. After many years in storage, it was sited here in 2018 by the Dunse History Society.

Return down the hill to Currie Street and turn right.

At the end of the high wall, turn right along a path to a small roundabout, where cars are parked. Before Currie Street was widened and Murray Street terminated in the car park, there was a road called Baillie’s Entry, named after the Baron Baillie who sat in the Court in Castle Street and had a house here.

Murray Street was originally called Shambles Wynd, the name taken from the fact it was a street of slaughterhouses. (Similar to the Shambles in York.)