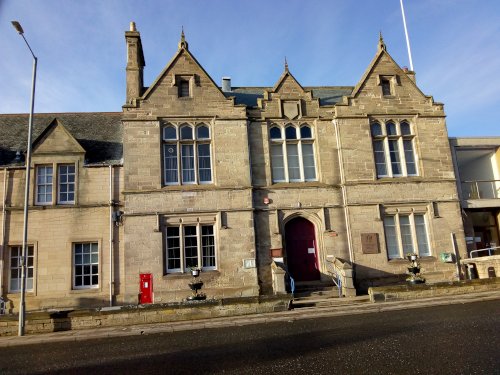 Built around 1855, in a Jacobean style, is the imposing former Sheriff Court of two storeys with three bays in a Tudor collegiate style — the central bay is approached by a flight of steps. The roof with fish-scale slating is worth noting. The building of the Sheriff Court was crucial in the establishment of Duns as the county town of Berwickshire, in place of Greenlaw.

Beside the entrance you can see a plaque which was presented in 1941 by Polish servicemen stationed in the County of Berwickshire.

To the right is a modern extension constructed in 1964, which until recently housed the local office of Scottish Borders Council.

To the left of the court is the police station, built in 1895 as the County Police Office.

Cross over the road to the south side of Newtown Street