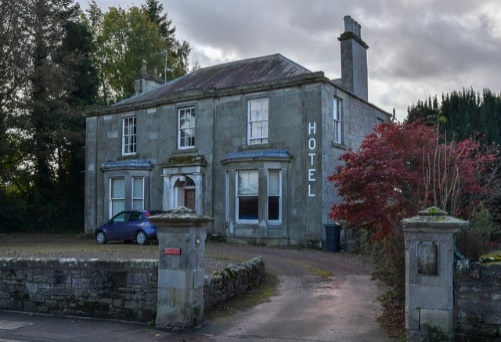 Looking straight in front of you, set back, is a house named The Barniken.

This is a mid-19th century villa, which was converted into a hotel, though no longer operating as one. Once more, you can see the panelled pilasters that can be found elsewhere in the town.

The coach house to the north has been converted into a house.

The area in front of the hotel and across towards the garage, was for centuries covered by a bog and the only way of crossing it was by a causeway. Throughout all the turbulent times in the Borders, the causeway was protected by a barniken (a fortified building). Bearing in mind just how often Duns was used as a muster and re-supply point for armies, the causeway and the barniken must have witnessed more than a few troop movements.

Bridgend is the name of the street that runs east past the garage, towards Berwick-upon-Tweed, uphill from the site of the causeway.

Halfway up Bridgend there is a small development of houses, which were built when two properties were demolished. One such property was The Poor House, which until the 1950s was a lodging house for itinerants. 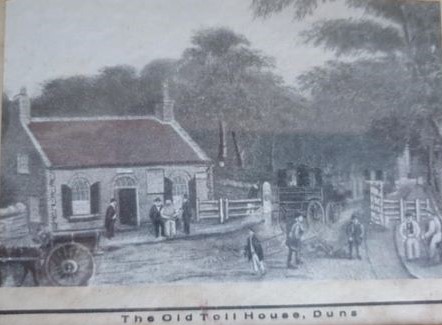 Nearby, set back from the junction of Murray Street and Station Road, is where one of the town’s tollhouses was situated. During the 18th century the road network was improved greatly in the Borders. This was due largely to the creation of Turnpike Trusts, which undertook road improvements, the costs of which were recouped by the imposition of tolls. The Duns area was turnpiked in 1791-2 and there was great opposition to the seven tollbars, two of which were in the town itself.

At the bottom of Currie Street, on the left, you will see a row of three houses from the late 18th century, then — across the narrow lane — is a smart house of the same period built as the Commercial Bank around 1820. For a few years this end of Currie Street was known as Bank Street.

The garage at the roundabout is built on the site of the Auction Mart, where a weekly market was held until the 1960s. There was extensive lairage (animal pens) around the mart, covering the site of the garage right across to the road in front of the two large houses. 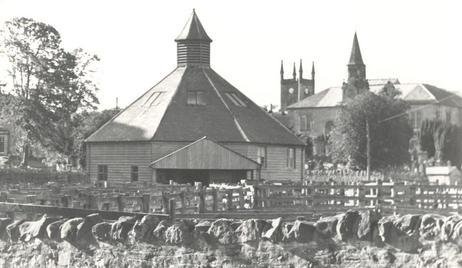 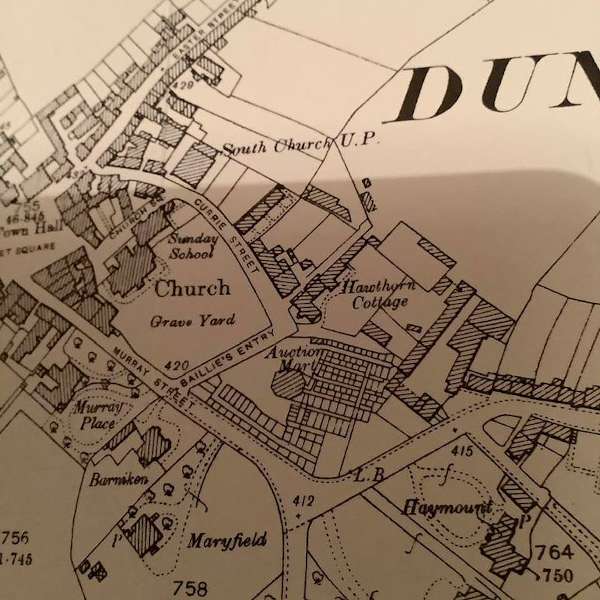 One of these houses was the Whitchester Cottage Hospital and the other, Moorlands, was the home of one of the local doctors. The large house with extensive gardens, next door to The Barniken, was also a doctors residence.

When Duns Station was still in operation, the cattle from the Mart would be driven along Station Road to the railway siding for transportation.

Originally this area was Bridgend Farm and backed on to fields simply called The Bogs. The area could also be accessed down a lane from the top of Easter Street called the The Slits and this also led to where Duns Football Club had its pitch and pavilion (Hawthorn Park).

At the top of Bridgend is the Roman Catholic chapel.

From the mini-roundabout walk along Station Road, past a number of fine villas, to the gates of the Public Park

At the top of Station Road was (yes, you’ve guessed it) Duns Station. 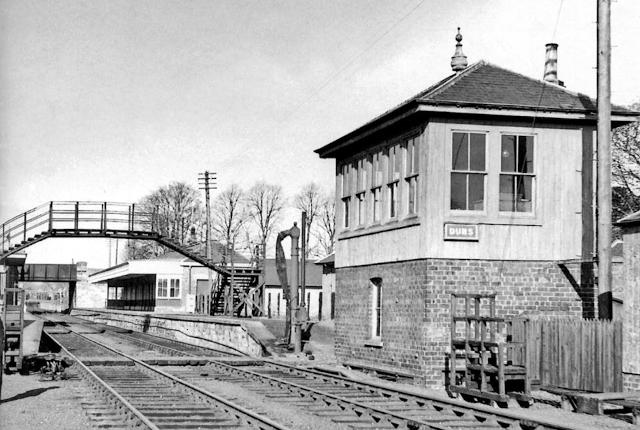 The station was opened in 1846 and served a route from Reston near to Berwick-upon-Tweed in the east to St Boswells in the west.  As a result of the damage to bridges and embankments caused by the great flood of 1948, the line was closed to passenger traffic.  A limited freight service continued until the line was finally closed in 1966.

Livestock used to be walked between the auction market and the station along Station Road.